Introduction: Chronic kidney failure is a common long-term complication after non-kidney solid organ transplantation (SOT) such as heart-, lung and liver transplantation. These patients may be offered chronic dialysis and/or kidney transplantation. Data on outcomes of kidney transplantation in these patients have been scarce, and the aim of the present study was to assess outcomes in a nationwide perspective.
Material and Methods:  Data were retrieved from the Norwegian Renal Registry for all patients that received a first kidney graft from July 1995 through Nov. 2017. Altogether 104 SOT patients were established in renal replacement therapy, 47 received a first kidney graft. The 4707 first kidney transplant recipients from the same period served as controls. The survival data are presented as crude Kaplan-Meier estimates.
Results: The SOT patients more often received DD kidneys, 79% versus 65% in the control population (P=0.031). They also tended to be older at the time of transplantation 55.1+15 years versus 51.7±16.8 years (P=0.13). Males contributed for 67% of the cases with no difference in gender distribution between the groups. Figure 1 shows crude patient survival after transplantation. In this crude analysis the patient survival is significantly lower for the SOT patients compared with controls (P=0.0001) but still about 75% are alive after 5 years and almost 40% after 10 years. Kidney survival censored for patient death is however similar in the two groups,  P=0.465 as shown in figure 2. 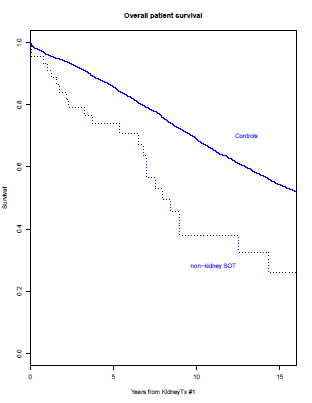 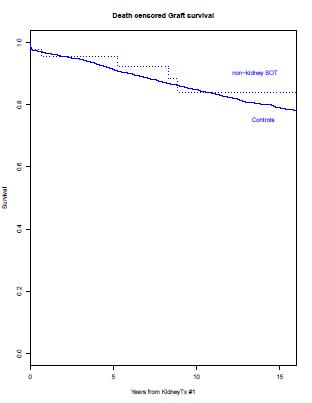 Discussion: The survival of SOT patients was substantially lower as compared with first kidney transplant patients. In the present analysis we could not correct for co-factors that are obviously of importance as they had more DD donors and numerically higher age and a long history of organ transplantation with immunosuppression before transplantation. However, although the results were impaired ¾ of patients were alive after 5 years which supports the use of kidney transplantation in this population. Also it is interesting that the faith of the kidney in survivors is as good as for first time kidney recipients with primary kidney disease.
Conclusions: Kidney transplant outcomes are excellent after non-kidney SOT transplantation and the practice appears appropriate with 75% patient survival for more than 5 years.