Although impact of preformed HLA-related donor specific antibody (DSA) in liver transplantation has been recognized, significance of desensitization is not established yet. Our aim is to share our experience of desensitization of  preformed DSA using a regimen for ABO incompatible (ABO-I) liver transplantation. Among 61 adult living donor liver transplantation (LDLT) performed from August 2011 to October 2017, 11 patients had positive DSA by single bead method (only Class I in 3, only Class II in 3, and both Classes I and II in 5 patients). Mean fluorescence Intensity (MFI) was greater 10,000 in 5 patients and less than 10,000 in 6 patients. Lymphocyte cytotoxic test (LCT)  was positive in 4 of 5 patients with high MFI and negative in all 6 patients with low MFI. The 5 patients with high MFI (only Class I in 1 and both Classes I and II in 4) were treated with rituximab (500mg) 2 weeks prior to operation and splenectomy during transplantation and triple immunosuppression (Tacrolimus, Steroid, Mycophenolate). Class I DSA was turned to negative in 3 and decreased in 1 and LCT became negative in all. Class II DSA turned to negative in 3 and the MFI was increased from 11,000 up to 14,000 once and decreased to 4000 600 days after transplantation in another patient, and decreased around 8000 in the other patient. LCT turned to negative I all 6 patients with positive Class II DSA. Acute cellular rejection occurred and was successfully treated with steroid pulse in one patient. Massive necrosis or sclerosing cholangitis reported as antibody mediated rejection (AMR) or chronic rejection was not observed. Three of 5 patients with high MFI developed stenosis of biliary anastomosis requiring interventions (60%). In conclusion, desensitization using rituximab for ABO-I LT was feasible for LDLT with strongly positive HLA-related-DSA. 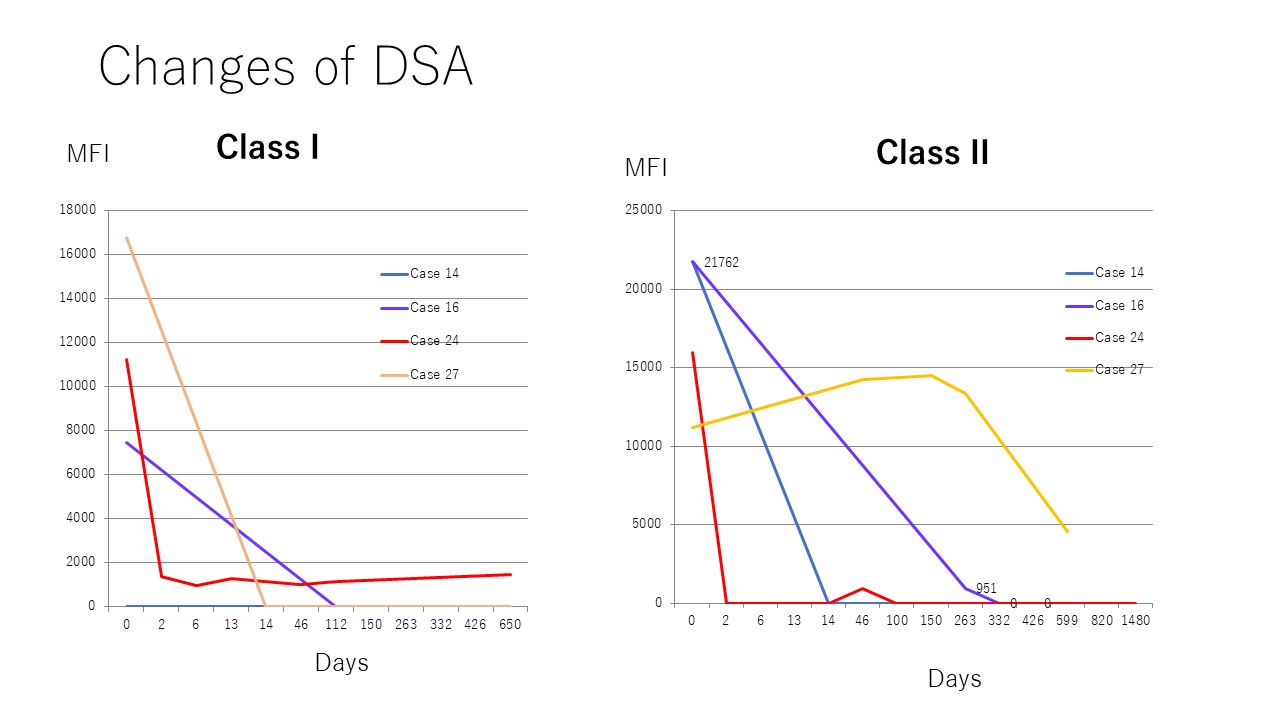