The Effect of Perioperative Antiplatelet / Anticoagulant Therapy on the Incidence of Early Postoperative Thromboembolic Complications and Bleeding in Kidney Transplantation. - A Dual Center Retrospective Cohort Study of 2000 Kidney Transplant Recipients

Thromboembolic complications (TECs) are dreaded complications after kidney transplantation (KTx). Although the incidence is low, the consequences are severe and can result in delayed function, or even graft loss. The perioperative use of anticoagulation may play a role in this, but a national protocol is missing due to lack of consensus on postoperative bleeding risks. Our objective was to determine the incidence of TECs and bleeding in relation to the use of pre- and intraoperative antiplatelet/anticoagulation therapy in KTx and to identify risk factors.
All patients >18 years, who underwent a living or deceased KTx between 2011-2016 in the University Medical Center Groningen or the Erasmus Medical Center Rotterdam, The Netherlands, were included and retrospectively analyzed. Exclusion criteria were combined transplantations or missing data on the use of antiplatelet/-coagulative therapy. Data from electronical databases and patient registries were merged. Events were scored in case of occurrence ≤7 days post-transplantation. TECs were defined as an arterial/venous renal thrombosis, deep venous thrombosis or pulmonary embolisms. Bleeding complications were scored after confirmation with imaging. Primary outcome parameters were the incidence of TECs and bleeding in relation to the use of pre-/intraoperative anticoagulation. Secondary outcome parameters were risk factors correlated to TECs and postoperative bleeding.
All statistical analyses were performed with SPSS Statistics 23.
A cohort of 2000 patients was included and stratified for TEC or bleeding. Of all patients 59% were men, mean age was 55 ± 14 years and 60% received a living donor kidney , 20% a DBD kidney and 20% a DCD kidney. Twenty-one patients (1.1%) had a TEC≤7 days post-transplant. Bleeding≤7 days occurred in 87 (4.4%) of patients. Univariate regression analysis for TEC identified (P<0.05) multiple donor arteries (odds ratio (OR) 2.79) and recipient obesity (BMI≥ 30 kg/m2, OR 2.85) as potential risk factors. Multivariate regression analysis for postoperative bleeding identified (Bonferroni adjusted P<0.004) the presence of cardiovascular disease (OR 2.30) and preemptive transplantation (OR 2.35) as potential risk factors. Use of intraoperative heparin (P=0.58), vitamin K antagonists (VKA) (P=0.10) or antiplatelet therapy (P=0.69) showed no increased risk for bleeding. 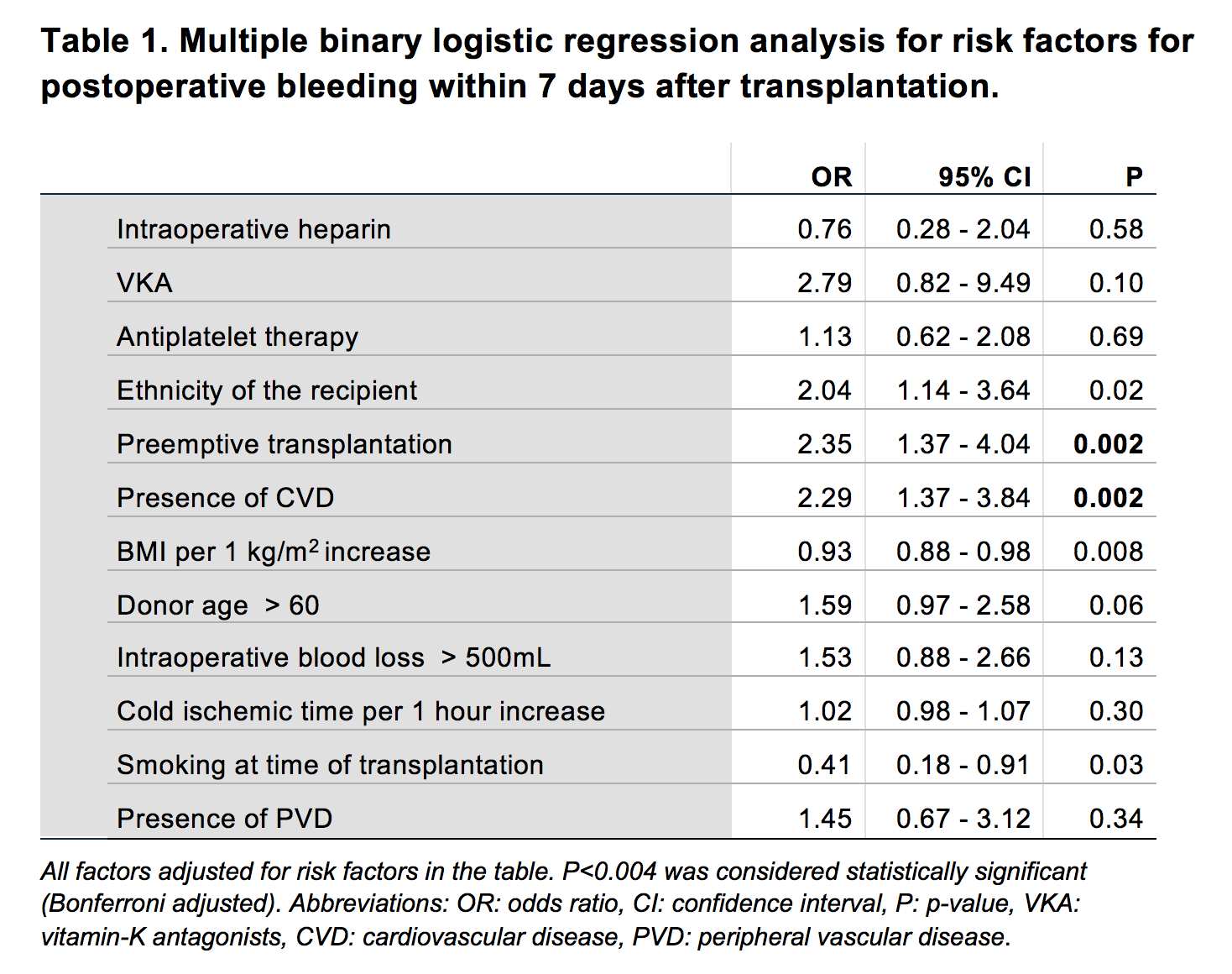 Conclusion Our results show that TECs occur in 1.1% and bleeding in 4.4% of kidney transplantations. Intraoperative heparin, continued use of VKA or platelet aggregation inhibitors does not lead to an increased risk of bleeding. Therefore, administration of these regimens to prevent thromboembolic complications appears to be safe