Introduction: On 01.12.15 Wales became the first country in the UK to introduce a ‘soft opt-out’ system of organ donation. Commissioned by Welsh government this first independent major research study evaluates the impact of the first 18 months of implementation.
Methods and Analysis: A co-productive, mixed methods multi-site trial partnered with NHS Blood and Transplant (NHSBT) collected data on all 205 approaches to relatives of potential organ donor patients between 01.012.15-31.05.17 (18 months) in Wales and 6 more in England. A total of 211 approaches. 182/211 deceased patients came under the auspices of the Act. Sixty-two in-depth interviews with 83 family members of 58 patients who were potential/actual organ donors, and 2 focus groups or individual interviews with 19 NHS BT professionals were also carried out. 118/186 SNOD questionnaires were completed. 22/186 Family Questionnaires. Data from NHS BT internal reports and statistics, Welsh Government reports, publicly available information, and additional systematic reviews and a discourse analysis of the media campaign provided additional context. 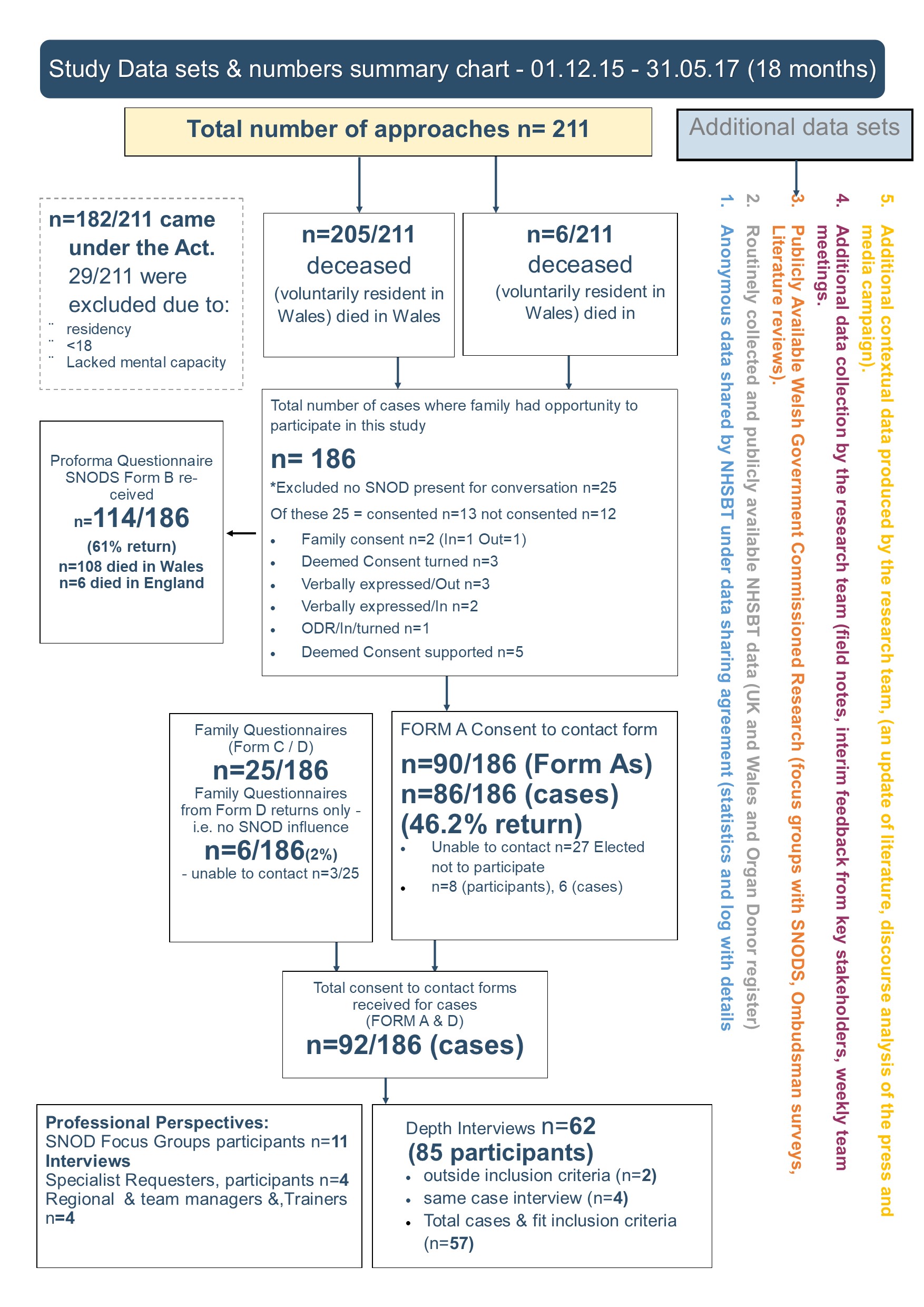 Results: Consent rates in Wales were 61% over the first 18months and 64% when family consent was removed. This was higher than England. However, family member(s) still went on to override the organ donation decision 31 times in 18 months. It is not always personal views that override a decision: health systems (comfort and perceived quality of care for families and their loved one) frequently turns the decision. Not all aspects of the Act have been implemented as intended, a legacy of nursing language has proved difficult to shift in practice ‘a wish’ frequently replaces the new language of the Act an ‘organ donation decision’. Deemed consent was too complicated for families to understand. ‘Doing nothing’ is not seen as a positive decision to support organ donation by most family member(s). The media campaign missed the changed role of the family.  Family member(s) still do not understand that they are no longer the decision maker about organ donation; they are required to put their own views aside and support the decision made in life. It is not easy to distinguish the full impact of the Act from the multiple additional interventions (professional retraining, NHSBT restructuring, media campaign) on the increase in organ donation consent rates in Wales.
Conclusions: Implementation of the Act has worked. People in Wales support the changes in law. Introduction of the Act has not resulted in lower consent rates or a backlash in public opinion. More work is needed to inform the family member(s) about their changed role.
Recommendations: A new campaign to focus on the role of the family. Increased support and comfort services for grieving families, ongoing training for NHS BT professionals approaching families to implement the Act as intended.