A Ten Year Retrospective Review of Infections in the First 12 Months Post Paediatric Liver and Liver-Kidney Transplantation at a Single Centre in Johannesburg, South Africa

Introduction: Two paediatric liver transplant centres exist in South Africa, one in Johannesburg and the other in Cape Town. The programme in Johannesburg at Wits Donald Gordon Medical Centre (WDGMC) began in 2005 and is now the largest volume paediatric liver transplant unit in the country. WDGMC also hosts the only live donor paediatric liver transplant programme in sub-Saharan Africa. This research determined the incidence and profile of infectious events in the first year after transplantation.
Materials and Methods: This retrospective record review included paediatric liver and liver/kidney transplants from 2005-2015. The paediatric population was defined as any recipient <18 years of age on the day of transplant. Only laboratory confirmed infections were included. Ethics approval was obtained from the University’s Institutional Review Board. Information was sourced from clinical records and pathology reports. Statistical analysis was carried out using SAS version 9.4 with a 5% significance level.
Results and Discussion: There were 69 transplants in 65 patients. 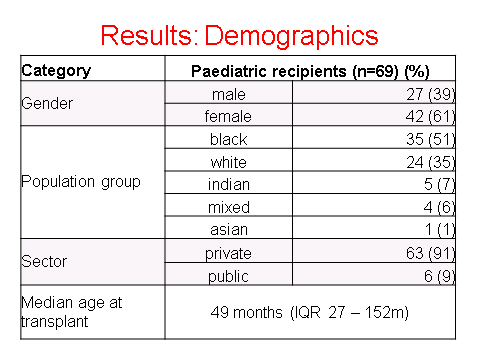 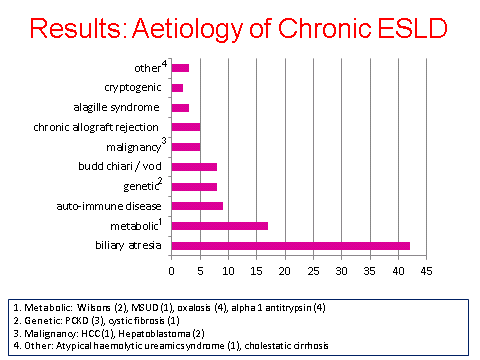 A total of 253 infections occurred, mainly in the first three months after transplant. The most common site was bloodstream, followed by the abdomen and urinary tract. Bacterial infections occurred most commonly (193/253;76.3%). Of these, gram negative organisms predominated (120/193; 62.2%) and klebsiella species (50/120; 41.7%) was most frequently identified. In the gram positive group (72/193; 37.3%), enterococcus faecium predominated (25/72; 34.7%). Drug resistance was higher in the gram negative group (75.0%; 36/48) when compared to the gram positives (22.9% (11/48). Prevalence of viral infection was 16.6% (42/253) and fungal was 7.1% (18/253). Candida parapsilosis was the most commonly identified fungus. TB prophylaxis is not routinely administered and there was only one case of mycobacterial infection.
This is the first study of its kind from sub-Saharan Africa. Gram negative infections were the most common, mirroring findings from the USA and Israel. What differed was that candida parapsilosis, not albicans, was the most frequently identified fungus and the most common primary site of infection was not the abdomen, but rather the bloodstream. Risk factors that may predispose to infection are severe malnutrition at the time of transplant and delayed referrals of young children with advanced disease.
Conclusion: Our findings suggest that standard TB prophylaxis may not be warranted, even in a country with high TB infection rates. This research has resulted in an urgent policy review in the transplant unit which has prioritised the nutritional status of children pre-transplant and implemented stringent infection control measures to prevent bloodstream infections.