Survival Benefit of Liver Transplantation in the MELD-Na era

Background: The model for End-Stage Liver Disease-Sodium (MELD-Na) score was introduced for liver allocation in the United States in January 2016. Liver allocation rules (Share 15 and 35) were determined using data from the MELD era. However, there may be changes in waitlist and transplant outcomes in the MELD-Na era. The aim of this study was to evaluate the impact of MELD-Na based liver allocation on waitlist and transplant outcomes, and to re-evaluate the survival benefit of liver transplantation in the MELD-Na era.
Methods: We examined two patient groups from the United Network Organ Sharing registry; MELD-era group composed of patients who were registered and removed from the waitlist between July 1, 2013 and December 31, 2015 (n=18,014) and MELD-Na era group composed of patients who were registered between January 1, 2016 and March 31, 2017 (n=10,187). Waitlist and transplant outcomes were evaluated in these two eras using Cox multivariable analysis. The survival benefits of liver transplantation were compared between the two eras and is expressed as a hazard ratio by MELD/MELD-Na score comparing mortality rate of LT recipients (death per 1000 patient year) compared to candidates on the waiting list. The risk was adjusted for age, gender, race, and primary diagnosis.
Results: Waitlist mortality significantly decreased in the MELD-Na era (Hazard ratio=0.621, P<0.001). 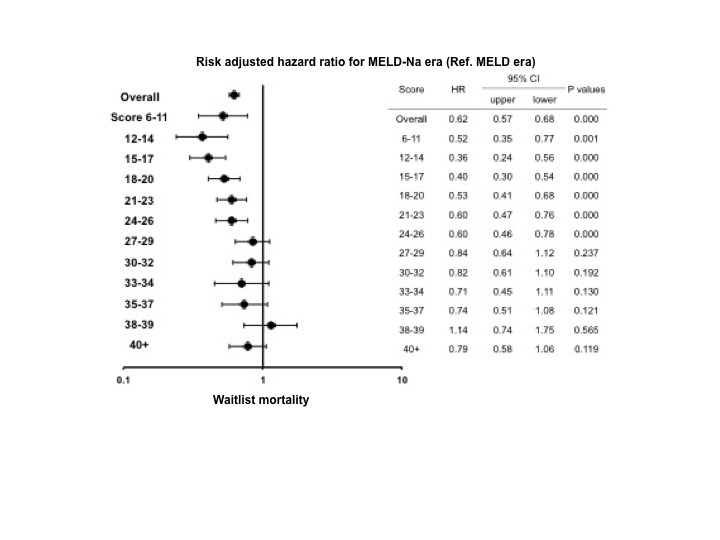 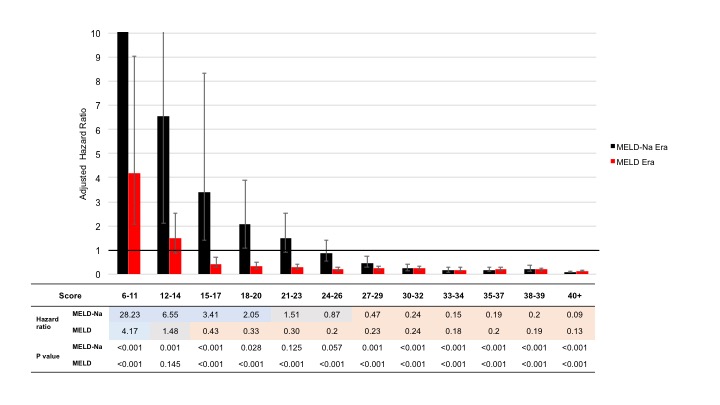 Conclusions: The MELD-Na score based liver allocation successfully decreased the risk of waitlist mortality. In this study, we found that the transition point justifying survival benefit of liver transplant was shifted towards higher score categories in the MELD-Na era. Given the discrepancy in survival benefit, the current share rules for liver allocation may be suboptimal and require revisiting. The bar for "Share 15" may need to be raised to potentially increase the availability of liver grafts for patients with more medical urgency. Further investigation into optimal liver allocation would be warranted.