Introduction Right lateral sector graft (RSLG) for living-donor liver transplantation (LDLT) was established in 2001 in our institute and we also have reported the feasibility of RLSG previously. RLSG is now accepted as the useful strategy to widen the donor pool. However, this procedure is technically demanding and includes some concerns in terms of venous drainage.
Materials and Methods From January 1996 to December 2016, there have been totally 29 liver transplant recipients received RLSG in 570 cases of LDLT in the University of Tokyo hospital. Among them, we experienced two cases of post-transplant hepatic venous outflow obstruction (HVOO) of right hepatic vein (RHV) in spite of special care for venous drainage by using cryopreserved allograft to make a large reservoir at the anastomotic site. The first case was 32 year-old female who received RSLG for congenital biliary atresia. She readmitted emergently 11 months after LDLT with symptoms of acute liver failure due to HVOO. The second case was 22 year-old female who also had a congenital biliary atresia and computed tomography for routine checkup after two years of LDLT revealed the severe stenosis with hemothrombus in the RHV.
Results Interventional radiology of balloon angioplasty with radical thrombolysis and EMS placement were performed in both cases. The first case was refractory to the initial treatment and the liver function deteriorate continually even after the success of EMS placement. It required temporary registration for re-transplantation by deceased donor. Fortunately, the liver function turned toward a recovery as the session of intervention progressed and she got recovered after total number of 11 sessions.(Figure 1) 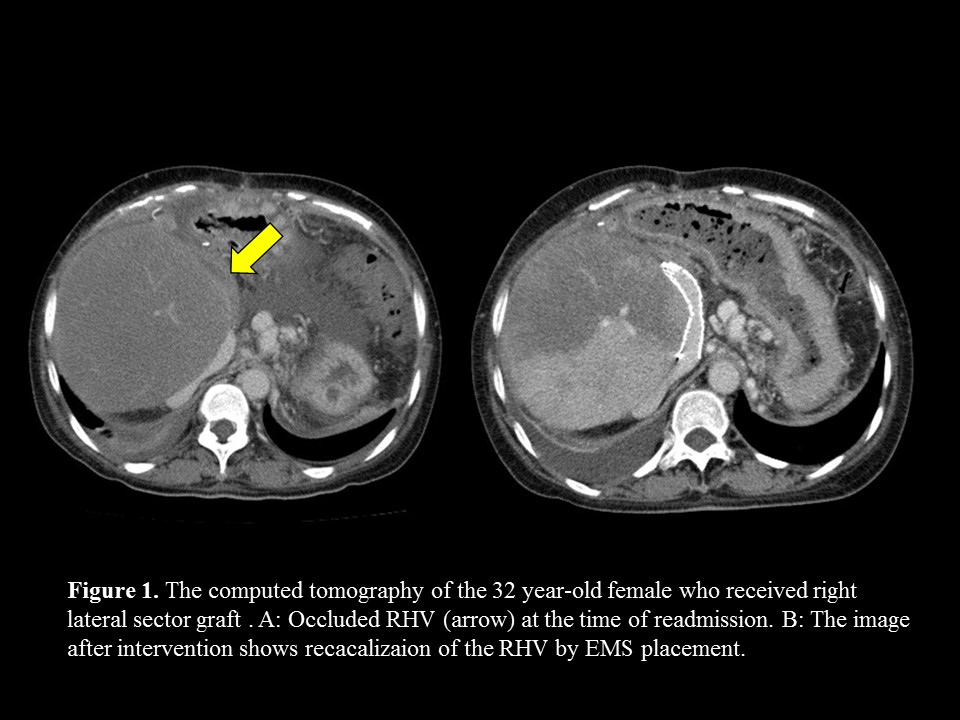 The second case underwent three sessions of intervention and the occlusion was relieved. Both of them are followed up in outpatient clinic in a stable condition with medication of warfarin as anticoagulant.
Discussion The most distinctive feature of RLSG is that venous drainage area almost mainly depends on the RHV and the vein itself is exposed on the resected plane. RHV in RLSG is considered to be more susceptible to be influenced by the inflammatory change or mechanical compression and easy to be distended or distorted by the graft hypertrophy.(Figure 2) 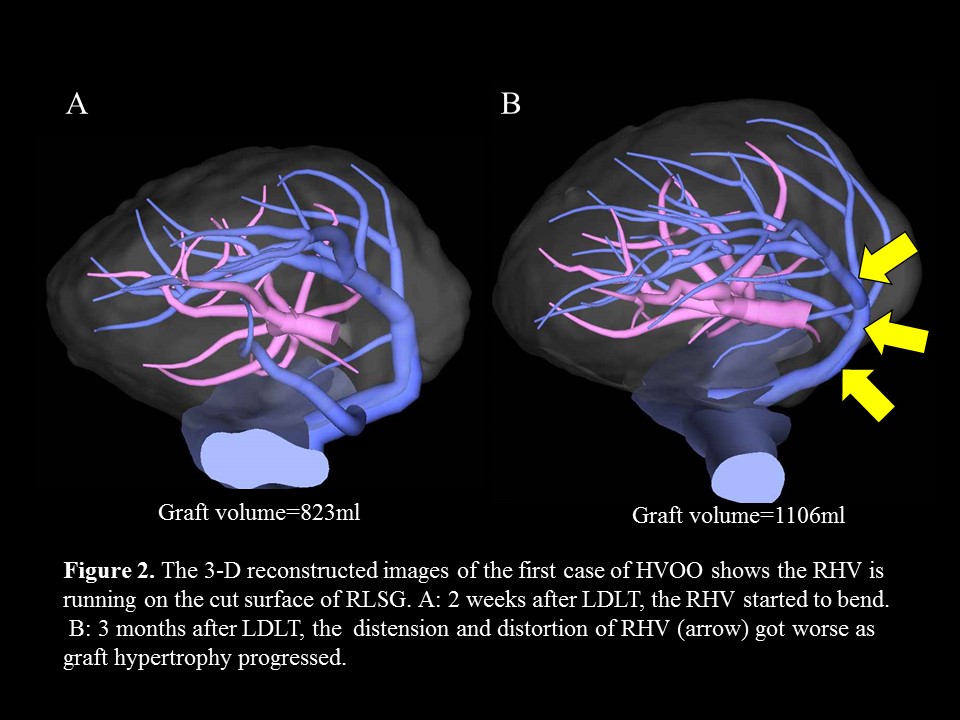 This is the possible cause of HVOO and subsequent congestion of the graft that leads to liver failure. The surgical procedure to the anastomotic site of hepatic vein would be difficult to approach and dangerous because of severe adhesion, therefore, insertion of the stent after adequate thrombolysis is less-invasive and resuscitative procedure to relief venous occlusion.
Conclusion Special attention should be payed to venous reconstruction in RLSG to reduce the risk of HVOO because of the anatomical feature in venous system.