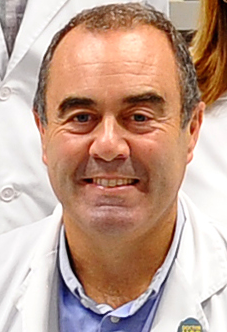 Immunologist at Marqués de Valdecilla University Hospital (Santander, Spain) from July 1997. Doctor in Medicine and Surgery from the University of Cantabria in 1997.
Head of the Immunology Service at Marqués de Valdecilla University Hospital from April 2012. Associate Professor in Immunology at University of Cantabria (Spain).
Member in a number of official organisms and scientific societies (SEI, SEAIC, SET, ONT). Secretary of the Board of the Spanish Society of Transplantation.
Research: mechanisms of immune tolerance. In the beginning I was focused on its role in the induction of autoimmune disease in experimental models but later I moved towards solid organ transplantation because of similar pathogenic mechanisms. In the last 10 years I have been focused on clinical translation of basic findings. Leader of the Transplantation and Autoimmunity Research Group of the IDIVAL Research Institute (Santander, Spain).
Research lines have been funded in competitive national calls: 14 as PI (5 Ministry of Health, 8 regional, 1 Fundación Mutua Madrileña) and 6 as collaborator (4 Ministry of Health, 2 Fundación Mutua Madrileña). Author of >180 works indexed in PubMed, 20 book chapter and active participation in national and international congresses. 13 directed PhD projects. Editorial Board: The Open Journal of Autoimmunity, Autoimmunity Highlights, Trends in Transplantation, ISRN Rheumatology.