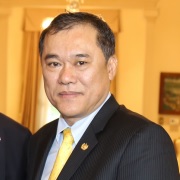 Cheng Yu Fan is the Professor of the Department of Radiology and Liver Transplantation Center at Kaohsiung Chang Gung Memorial Hospital. He is the pioneer in liver cancer treatment, transplantation and interventional radiology, and has been supported by national research grants for more than 20 years. A graduate of the China Medical University, he completed his radiology training at Chang Gung Memorial Hospital, Taiwan and Mallinckrodt Institute of Radiology, Washington University School of Medicine, St. Louis, USA. After becoming the Professor of Radiology in 2003, he was subsequently bestowed with the title of Honorary Professor by several international universities. Furthermore, he has established the liver imaging and interventional radiology program as an international training center in Kaohsiung Chang Gung Memorial Hospital. Through this, he has trained many international fellows from all around the world. He has published more than 300 scientific articles and has lectured in nearly 100 international congresses. He has received the prestigious awards, Symbol of National Quality and National Biotechnology Award and Medical Care Quality Award from Taiwan, in addition to the numerous international awards and recognitions, such as the Medical Contribution Medal in Central America. A well-known scientific physician, he is now one of the global leading experts in interventional radiology and liver transplant imaging.