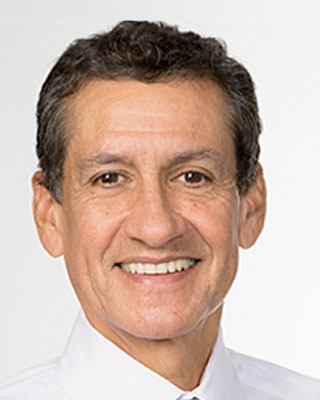 Carlos O. Esquivel is The Arnold and Barbara Silverman Professor of Pediatric Transplantation and Professor of Surgery at Stanford University School of Medicine. He is Chief of the Division of Abdominal Transplantation and Director of the Liver Transplant and Intestinal Programs at Lucile Packard Children’s Hospital at Stanford. He is also the Associate Director of the Institute of Immunity, Transplantation and Infection . This institute fosters collaboration between basic scientists and clinicians in translational research. He received his M.D. degree from the University of Costa Rica School of Medicine, completed general surgery training at the University of California Davis and then obtained a doctoral degree from the University of Lund in Sweden. He trained in multi-organ transplantation at the University of Pittsburgh under the direction of Dr. Thomas Starzl. From 1988-1995, Dr. Esquivel was the founder of the Liver Transplant Program at California Pacific Medical Center (Former Pacific Presbyterian Medical Center) in San Francisco. He was then recruited to Stanford in 1995 to develop and head the pediatric abdominal transplant programs, a goal that he successfully achieved by building one of the busiest pediatric organ transplants in the country. His leadership is characterized by his ability to articulate a vision and build collaborative relationships. Dr. Esquivel is recognized worldwide as an expert and pioneer in transplantation, particularly in pediatric liver and intestinal transplantation. He is a creative and productive investigator who has published more than 300 publications in the scientific literature and given over 180 lectures throughout United States and internationally. He is the Deputy Editor of Pediatric Transplantation and an Editorial Board member of several high impact transplantation journals. Dr. Esquivel is also regarded as an outstanding educator having trained many fellows from all over the world in clinical and transplantation research. Almost 90% of his graduating fellows remain in academic medicine and many of them already have positions of leadership. Dr. Esquivel also oversees multiple basic science and clinical research projects that seek to advance the field of transplantation and improve the lives of transplant patients and their families.